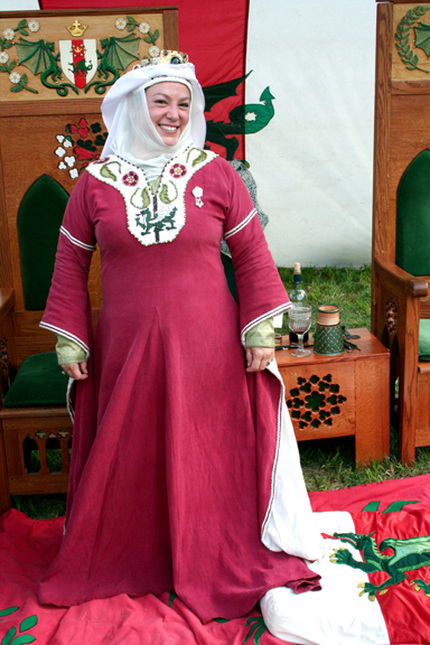 Ceinwen, Queen of the Middle Kingdom, Rose Tournament Bliaut - Sept. 8, 2010
The bliaut is an enigmatic gown.  Theories abound on the proper construction.  I can't say that I have found the one way to reconstruct it, but I have tried a couple differnt methods and found the ones I believe to be the most accurate.  My favorite thing about this gown is the ability to either keep it simple or really go all out with embroidery and gems.  The extraordinarily full skirts are also a lot of fun.

Currently, I've made one bliaut for the Queen (at the time) of the Midrealm.  She preferred the style and theory that it was more of a fitted tunic, so that's the contruction theory I adhered to.  The undertunic is an extended sleeved T-tunic of striped light and dark olive silk.  I then couched silver threads in a decorative pattern along the neck line and sleeve cuffs.  The bliaut is made from a wool silk blend that I dyed "wine."  I then lined the bliaut sleeves with a very light weight linen in a natural color and used the same linen for the accent  to create the keyhole neckline.  Before attaching it, I drew and embroidered using silk threads the leaves, tudor rose (SCA symbol of a queen) and the Midrealm dragon which used silver thread as accents.  I then added pearls, garnets, and stone beads to finish accenting the neckline.  Finally, I finished the sleeves and arm cuffs by inkling a woven band from silk and bamboo blend yarn.    She provided her own veil. 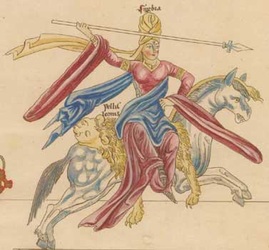 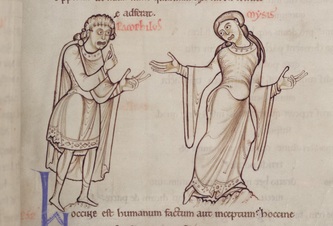 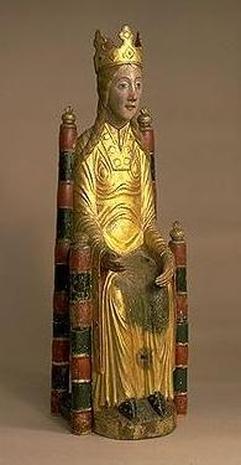 Madonna of Viklau, Church of Viklau, Sweden
I'm currently working on a bliaut for myself using a different construction method.  For mine I have elongated the waist quite a bit and will lace it up the side in order to create the scrunching seen in statues and illuminations.  I have used a silk, linen, rayon blend, which I found for a steal (7 yards for $28).  I have included 16 gores and used all but the smallest amount of the fabric, which was waste when cutting in the body.  I dyed linen to a mauve color, providing a nice contrast to the striped material fo the bliaut and lined the sleeves.  Using the same dyed linen I am couching gold thread for the neckline.  This is taking quite some time since I'm a perfetionist and it's not so easy to do this with a small child.  I hope to complete it soon as I'm very excited about wearing this dress!

I have also decided against the veil.  I simply don't look good in them.  Instead, I've made a hat which is really more of a man's hat, but I found an illumination with the "virgin" women wearing it.  I'm sure it's supposed to be some kind of statement, but I like it.  Besides, the hat will help hide how I attach my fake hair, since mine will never be as long as it is represented in period.