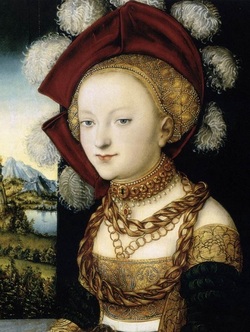 Salmone by Lucas Cranach the Elder c. 1530
When I first joined the SCA, I said there was no way I would every wear one of these gowns - I would do any style except landschneckt or any version of slash and pouf.  As I've been in the Soceity longer I can see the appeal of this gown; it's fancy, awe inspiring when well done, a great dress to show off some fancy embroidery and/or pearling, appears to be a bit more agile of court wear than my Tudor, and seems like a fun challenge.  So here I am researching, picking out materials, and genuinely excited to make my German Saxon gown.

One of the first challenges I had while researching the gown was naming it for the search.  Like most gowns of the period, they have been named after the fact - it's not like someone woke up in the morning and said "I think I'll wear my green German Saxon gown today."  What surprised me the most was the fact that I received the most results when referring to it as a Cranach gown, being named after Lucas Cranach (both the Elder and Younger) who often painted women in this style of dress.

While I'm still playing with ideas and construction, I have now found a few things that really seem to work for me and give me the feel and look of stepping out of painting.  Of course, each new gown I try something different.  Sometimes it works, and sometimes... well.... not so much.

My blog has my first attempts at a German gown based on a Cranach drawing and inspired by the Landsknect.  Overall, not a bad first attempt, but I did learn many things. Below is the Arts and Science paper I wrote when I submitted it for judging, which not only compiles the blog into a more readable submission but also includes additional research I did on the gown.

I have also now included my A&S Paper on all layers for the making of my first German Saxon gown.  I love how this came out.  It is incredibly fun and I receive lots of compliments on it, which always makes me feel good.  Again, this is just my theory.  There are other ways, and I'm still experimenting with methods.  Like modern construction of garments, I'm sure there is more than one way to make this dress.  This is just mine.

If you don't want to read the small book that is my A&S documentation, I have also included my class on the matter and as such have a handout I compiled with quick notes and comments on my construction of this gown, and of course, the layers underneath.

I also have a fondness for sumptuary laws.  They are insights to the daily lives of the culture and places we wish to recreate.  They explain how celebrations were had, weddings, funerals, christening, holidays, and daily life were experienced.  They outline the importance of dress to one's status, and explain the ideals of a culture.  For those also interested in this, I have included some research I have done on the German Reformation and Sumtuary Laws, which was part of my A&S entry as a research paper. 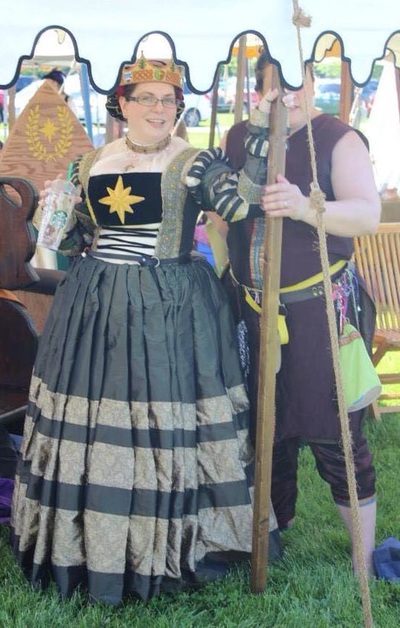 Front view of German-Saxon - my formal necklace broke so please ignore the temporary. 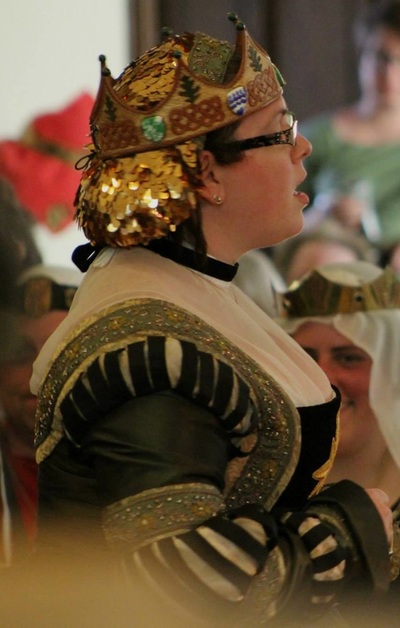 Side view of German-Saxon - my formal necklace broke so please ignore the temporary. 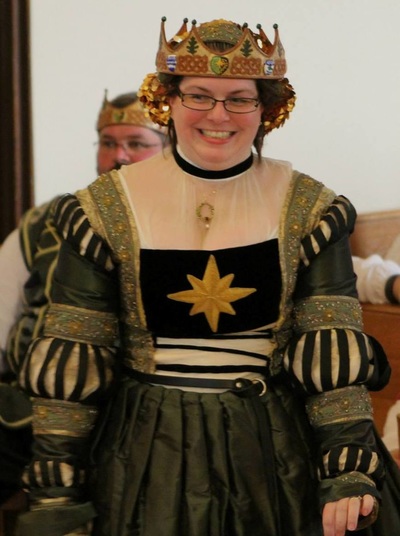 Front Half view of German-Saxon - my formal necklace broke so please ignore the temporary. 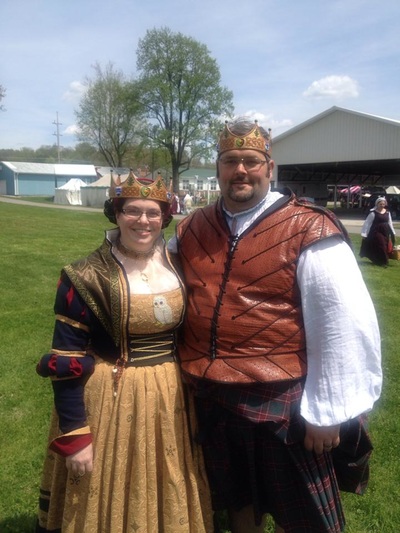 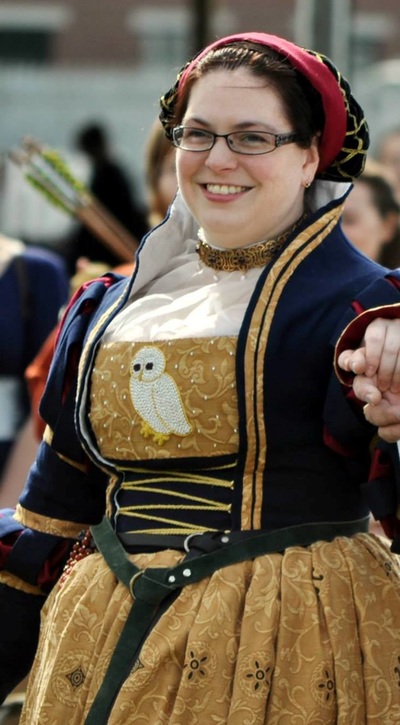 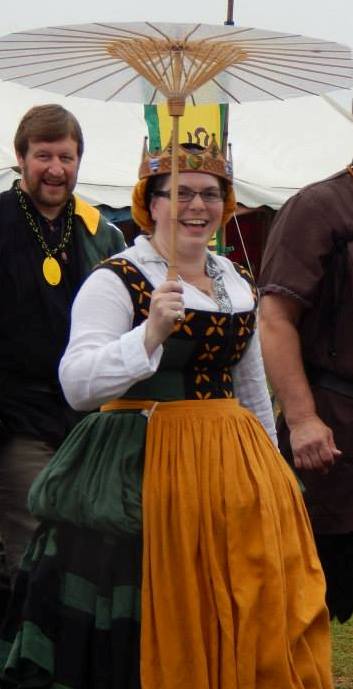 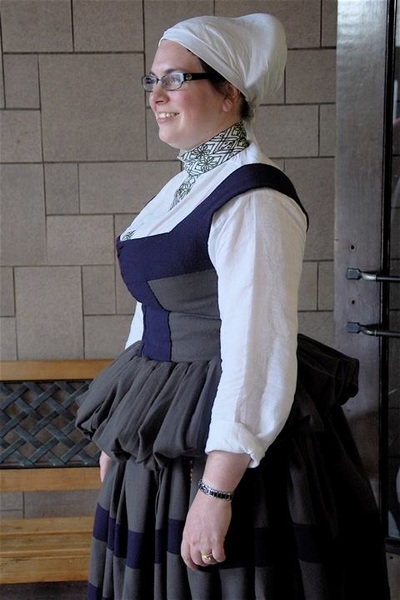 Nuremburg gown hiked up with 3/4 view 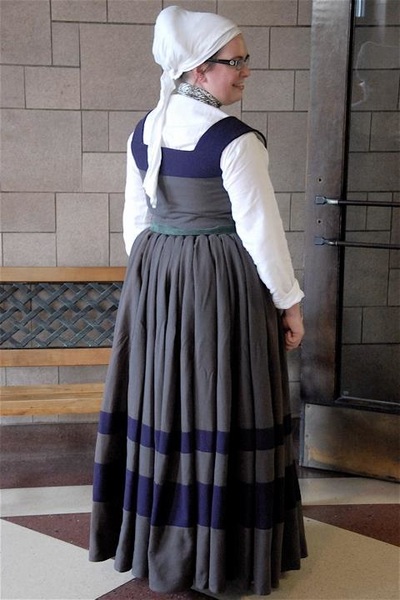 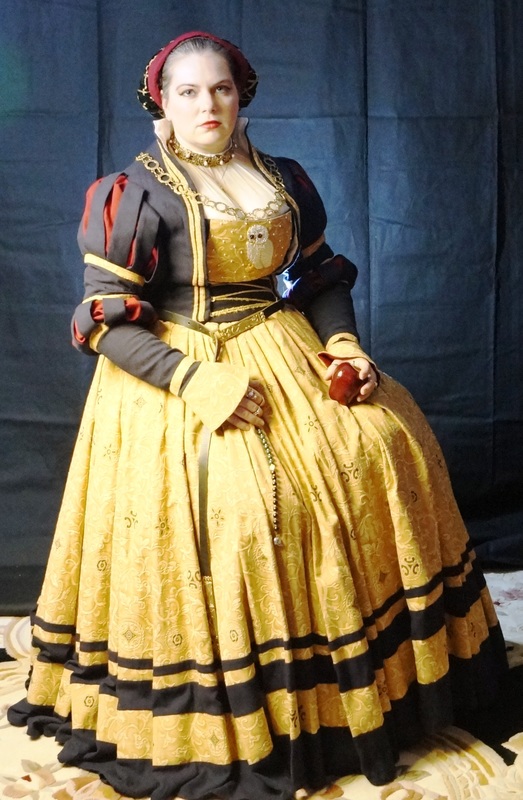 My attempt at the dower face represented in most portraits. Much prefer to smile!